I recently came across an issue where a Windows 10 (1511) task sequence would hang during a software update task. The patch being installed at the time didn’t appear to be consistently the same, so I ruled out an issue with the update. After some digging I found this article which nailed the issue down to a crashing Windows Update service.

The suggested work around appears to work, but is a manual process. The script below automates the same process.Basically it sits in the background and checks the wuauserv service every 60 seconds. If it is in a StopPending state, it waits another 120 seconds, and if still in the same state, resets both the wuauserv and ccmexec processes.

Note that the task sequence progress bar can hang quite a while before the Windows Update service actually crashes. It seems as though the updates keep installing in the background.

This can be added to an SCCM package and launched from a Run Command Line task. Using start from within the command line will launch it in the background i.e. 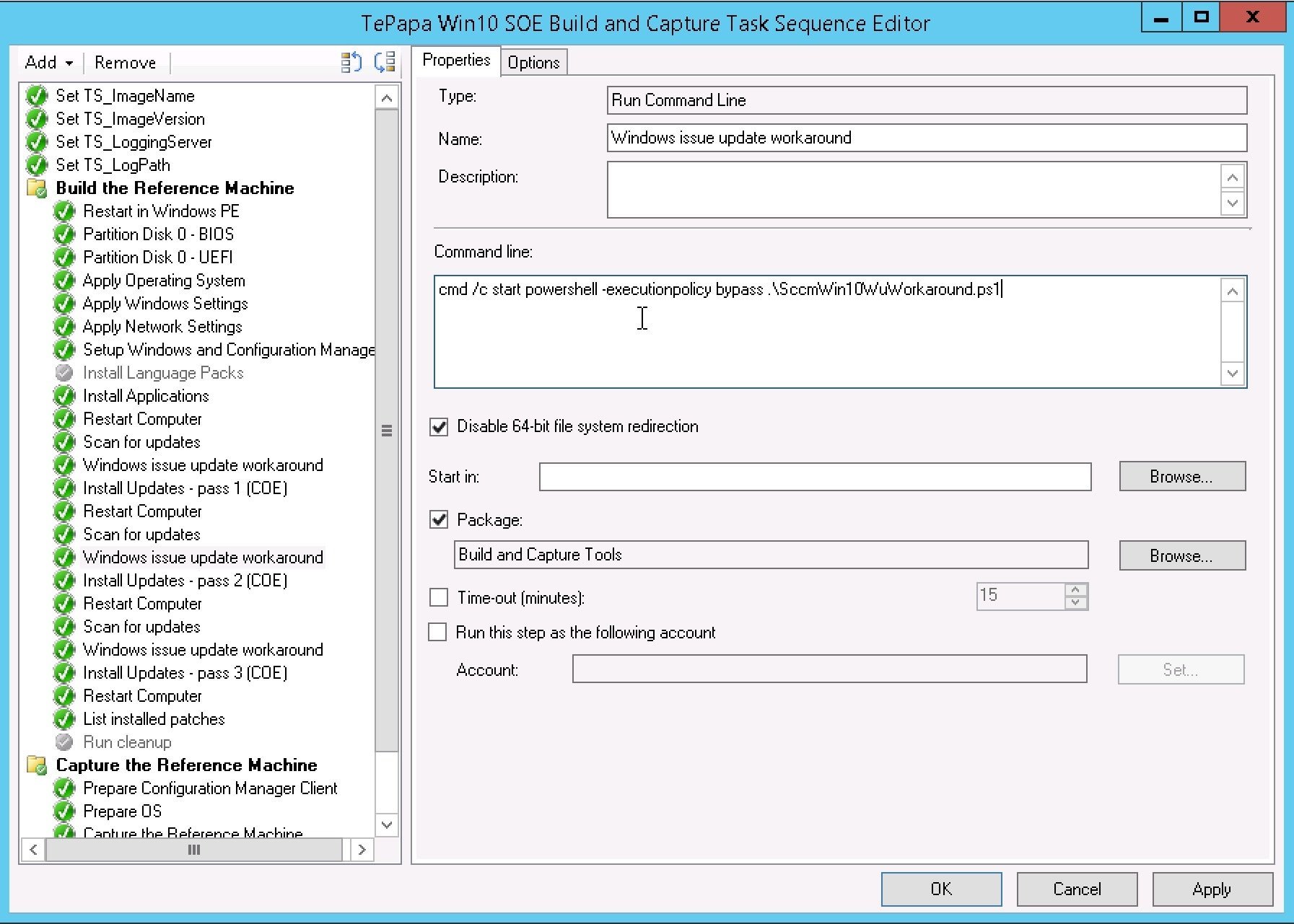 Note that this might still error the task, so select Continue on error for the Install Software Updates step. I have multiple passes in my build and capture task to retry any failures.

Hi all, I have noticed that there was a configuration issue that meant any contact form submissions may have not come through. If you have posted to the contact form and haven’t had a response, Read more…

Hi all, Just a wanted to give a quick update. Firstly, some may have noticed that there is a new TsGui version available on the site. This version adds the ability to sort your DropDown Read more…

We use cookies on our website to give you the most relevant experience by remembering your preferences and repeat visits. By clicking “Accept”, you consent to the use of cookies.
Cookie settingsACCEPT
Manage consent

This website uses cookies to improve your experience while you navigate through the website. Out of these, the cookies that are categorized as necessary are stored on your browser as they are essential for the working of basic functionalities of the website. We also use third-party cookies that help us analyze and understand how you use this website. These cookies will be stored in your browser only with your consent. You also have the option to opt-out of these cookies. But opting out of some of these cookies may affect your browsing experience.
Necessary Always Enabled
Necessary cookies are absolutely essential for the website to function properly. This category only includes cookies that ensures basic functionalities and security features of the website. These cookies do not store any personal information.
Non-necessary
Any cookies that may not be particularly necessary for the website to function and is used specifically to collect user personal data via analytics, ads, other embedded contents are termed as non-necessary cookies. It is mandatory to procure user consent prior to running these cookies on your website.
SAVE & ACCEPT