Hi all, There is a new version of TsGui on the Download page. This version fixes the issue where the TsGui window doesn’t open center screen like it is supposed to in WinPE. In the process of fixing that issue, I also developed a ‘Live Data’ window that is useful Read more…

By mikep, 5 years5 years ago

Hi all, I’ve just uploaded a new version of TsGui to the site. The main feature for this version is a new “NoUI” section. This lets you create TS variables without anything displayed in the GUI. They are also group aware, so you can create multiple TS variables based on the selection Read more…

By mikep, 5 years4 years ago

Hi all, I’ve just posted version 0.9.6.3 to the site. This fixes inheritance on the <PurgeInactive> option, which wasn’t flowing down the tree, e.g. from <Page>, <Row>, <Column>. This update also adds the ability to set the position of the TsGui window on the screen. See the <WindowLocation> option in Read more…

By mikep, 5 years4 years ago

I have uploaded TsGui 0.9.6.0 to the downloads page. This update brings a few new features: 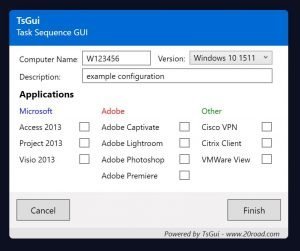 END_OF_DOCUMENT_TOKEN_TO_BE_REPLACED

By mikep, 6 years6 years ago

Hi all, Today I have published TsGui 0.9.4.0 to the site. This update brings the ability to create drop down lists based on WMI queries. I built this function primarily to list the available disks for the user to select where to install Windows. To get more information on how Read more…

By mikep, 6 years5 years ago

Hi all, I have just uploaded version 0.9.3.1 to the downloads page. This release brings three new updates: You can now bypass validation checks for empty FreeText options. This lets you have a text box that is optional, but if something is entered, it must meet your validation rules (minlength, disallowed Read more…

By mikep, 6 years6 years ago

I recently came across an issue where a Windows 10 (1511) task sequence would hang during a software update task. The patch being installed at the time didn’t appear to be consistently the same, so I ruled out an issue with the update. After some digging I found this article which nailed the issue down to a crashing Windows Update service.

The suggested work around appears to work, but is a manual process. The script below automates the same process. END_OF_DOCUMENT_TOKEN_TO_BE_REPLACED

By mikep, 6 years ago

We use cookies on our website to give you the most relevant experience by remembering your preferences and repeat visits. By clicking “Accept”, you consent to the use of cookies.
Cookie settingsACCEPT
Manage consent

This website uses cookies to improve your experience while you navigate through the website. Out of these, the cookies that are categorized as necessary are stored on your browser as they are essential for the working of basic functionalities of the website. We also use third-party cookies that help us analyze and understand how you use this website. These cookies will be stored in your browser only with your consent. You also have the option to opt-out of these cookies. But opting out of some of these cookies may affect your browsing experience.
Necessary Always Enabled
Necessary cookies are absolutely essential for the website to function properly. This category only includes cookies that ensures basic functionalities and security features of the website. These cookies do not store any personal information.
Non-necessary
Any cookies that may not be particularly necessary for the website to function and is used specifically to collect user personal data via analytics, ads, other embedded contents are termed as non-necessary cookies. It is mandatory to procure user consent prior to running these cookies on your website.
SAVE & ACCEPT